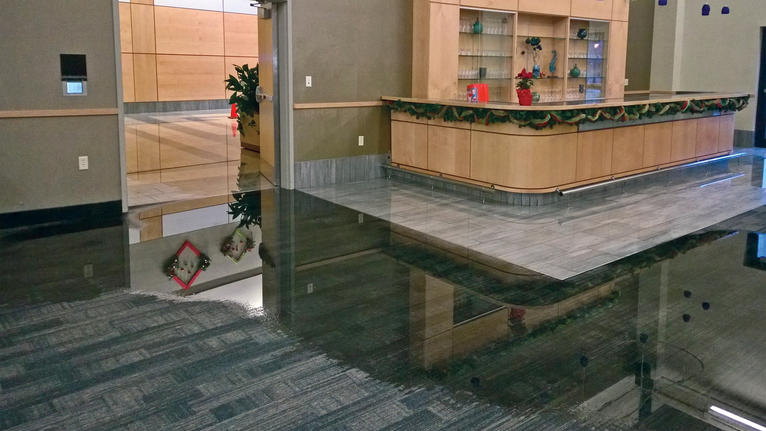 That is unless it's gushing from a water line inside their facility and onto brand-new flooring.

An employee coming into work had heard an unusual noise and discovered that a clamp on the water line had broken. A huge geyser of water was shooting up into the air - and thousands of feet of just installed floors were already flooded.

"When I got there, I absolutely could not believe what I was seeing," Murgia said. "My first response was simply, 'How on earth are we going to get out of this?"

Over 3,000 square feet of new flooring, in four major areas of the facility, were soaked. In the Cataract Room - aptly named, in this case - some standing water was already a couple of inches deep. Small waves from the puddles lapped at the feet of those tiptoeing across the sodden floors.

Using Wet-Vacs and floor scrubbers, Murgia and his staff worked for several hours to remove all the water. Once it was gone, the local SERVPRO franchise began drying the carpet and testing it for damage while Murgia held his breath, expecting the worst.

But there was no damage.

No smell. No rippling, bubbling or pulling up at the seams. No discoloration. When it was completely dry, the flooring once again looked brand new.

That's because the flooring was Tarkett's Powerbond®, a hybrid resilient sheet flooring, featuring a distinctive closed - cell cushion construction making it impermeable to wetness; moisture stays on top of the floor, rather than seeping down to the subfloor where mold and mildew can grow.

Although Powerbond has been used in installations for more than four decades, Murgia wasn't familiar with either the product or its manufacturer before the center's designer and flooring retailer recommended it. But he and his team loved the floor's beautiful pattern and intricate design.

And once he understood how Powerbond worked, Murgia was convinced it was a perfect fit.

"To anyone looking for a superior product that will totally serve the purpose and stand up over time, don't go with anything but a Tarkett product," he says. "We absolutely couldn't be happier with Powerbond's quality, its look and the purpose it serves."

Just a few days after the facility's massive leak, the scheduled wedding went off as planned - on the same floors that had been underwater earlier. No sign remained of the extensive flooding throughout the center.

"Powerbond actually does exactly what it says it will," says Jason Murgia. "And that's a very good thing."